Commentaries on Liber AL vel Legis,  The Book of the Law, by various authors

“Those who discuss the contents of this Book are to be shunned by all, as centres of pestilence.”

The Commentaries of AL (Equinox Vol. V No. 1) by Marcelo Motta

Readings elsewhere on this site

Then This Line Drawn Is A Key by Colin Campbell

Centre of Pestilence by John Bowie.

The War Engine of Liber AL by Aion

Readings on other sites

Corn on the Khabs, being a Class PG-13 comment on Liber AL vel Legis by Center O' Pestilence

Centre of Pestilence by Frater Ἀπολλύων 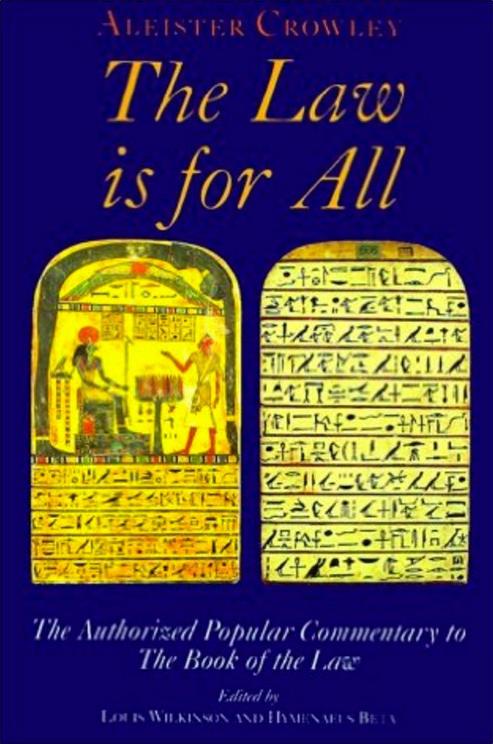 Aleister Crowley's life and thought are inexorably linked with The Book of the Law (Liber AL vel Legis, sub figura CCXX). He was not the author of this short, prophetic text. He received this visionary work by direct-voice dictation from a preterhuman, possibly discarnate intelligence in Cairo in 1904.

Crowley was an intelligent sceptic, and at first found this improbable means of communication as difficult to accept as most intelligent readers will today. Yet he could not ignore it or its message, and eventually concluded that it stood as conclusive proof of the underlying assumption of all religion - that intelligences superior to mankind not only exist, but take an active role in our welfare. He found that The Book of the Law holds the keys to the Next Step in human evolution, and sets forth the spiritual principles of a New Aeon.

He worked for decades to interpret its meaning for initiates and the general public, but rejected commentary after commentary as inadequate. He eventually concluded that he was too close to his subject to judge the value of his own commentaries, and entrusted the task to his best friend, Louis Wilkinson. Wilkinson (who wrote under the pen-name Louis Marlow) possessed impressive literary qualifications and had the advantages of knowing Crowley well and being a layman in esoteric matters. The result of his work is this long-awaited authorized popular edition of Crowley's new commentary on The Book of the Law, and its first appearance as Crowley wished it. Louis Wilkinson's editorial work was posthumously completed and augmented by Frater Superior Hymenaeus Beta of the O.T.O. This new edition features annotations, reading lists and indexes, as well as an insightful introduction by Louis Wilkinson.